These days, every company is a media company. The ability to reach stakeholders directly through digital channels has, in some cases, rendered mainstream media redundant, since organizations are able to produce and distribute compelling, useful content themselves. Nonetheless, mainstream media has not stopped innovating.

The New York Times turned heads with the production of an interactive feature titled “Snow Fall,” an in-depth look at an avalanche in Washington state that left several people dead. This inspired approach to online storytelling has informed other projects, one of which enabled Microsoft to use its own website (i.e., “owned media”) to tell the world about its internal process for the development of secure products and applications.

The Security Development Lifestyle (SDL) story was told in an interactive piece titled “Life in the Digital Crosshairs.” Told in multiple chapters, the story weaves video, images, interactive graphics, animations, and narrative text into a unique whole. As a result, readers shrug off the preference for short material and dive into longer-form content. The Waggener Edstrom team behind the feature also repurposed its elements for broader distribution; each video contained in the piece, for example, appeared as a separate YouTube video.

Even though the article didn’t have a hard news angle, it was covered in 26 publications. More important, though, it was visited more than 60,000 times and, in total, reached an audience of more than 7 million. Congratulations to Waggener Edstrom Communications and Microsoft for taking the prize for Best Multimedia Campaign in PR Daily’s 2014 Digital Awards. Congratulations. 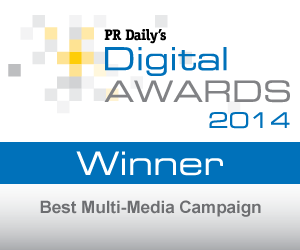