How many 13- and 14-year-olds really know what they want to do when they grow up? The nation of Sweden is in great need of more skilled vocational labor in the coming years, but these kinds of jobs and study programs don’t often appeal to today’s young people. So WorldSkills Sweden, a not-for-profit organization funded by the Swedish government and other stakeholders, teamed up with MSLGROUP and Coller to devise a unique campaign to attract young teens to its national skills expo, Yrkes-SM: “Fake Ads for Real Jobs.”

For their work, we award MSLGROUP and Coller top honors in the Best Use of Paid/Sponsored Content category of PR Daily’s 2013 Social Media Awards.

MSLGROUP chose Facebook to reach out to its target audience of 13- and 14-year-olds, and produced a series of ads to build awareness of the expo. The ads depicted a series of humorous job opportunities: Justin Bieber’s hairstylist, Pokemon trainer, soccer chef, and “super-boring business bloke” (asking questions like “Do you love ties? Are you able to stay awake during full-day meetings without a break?”).

The ads provided obvious contrast to the jobs and educational paths represented by Yrkes-SM, showing the target group how specific vocational career paths could actually lead to real jobs. Results? Sixteen percent of all 13- and 14-year-olds in the region engaged actively with WorldSkills Sweden’s content, and a record number of 22,000 visitors came to Yrkes-SM.

For the real job they did, credit goes to Christian Åkerhielm of MSLGROUP, Eric Aronson of MSLGROUP, Fredrik Lundewall of Coller, and Bengt Allard of Coller. 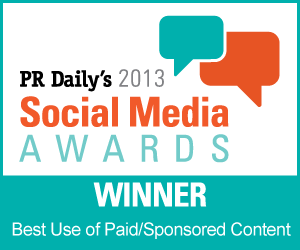