New York University’s Langone Medical Center put out its fifth annual Team Science Research Report this year. The first thing to be said about this latest report is, “It’s beautiful.” The second is, “It’s written in jargon-free, crystal-clear prose meant to be read by anyone and everyone.”

The third observation is, “They’re actually doing things like this in medical research?”

The Team Science—2012 Research Report is elegant, readable, short (62 pages), and reveals a world still invisible to most: the rapidly expanding universe of team medical science.

It is for these reasons that the Langone Medical Center is co-winner of the Best Print Publication category in Ragan’s 2013 Health Care PR and Marketing Awards.

The authors of the report chose six teams of interdepartmental physician-scientists in translational biomedical research at Langone, and photographed them conversing “in an environmentally rich setting” that included “a representational object from the laboratory, the clinic, or the street.” These photos look rich, unstaged, and alive with the powerful personalities of scientific and medical research movers and shakers.

The authors say, “We wanted to illustrate that the School’s research scientists and physicians reach out to colleagues in their own field[s] and to those outside their fields of expertise.”

The report does much more than that:

The people responsible for this report are Marjorie Shaffer, editor, and Sherry Zucker, production coordinator. Congratulations.

The report is on view here. 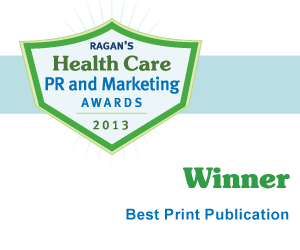