Joy couldn’t be any more a befitting part of someone’s name than that of 3-year-old Emily.

A mere toddler, the courageous child was at the heart of an impactful and inspiring effort from Arnold Palmer Hospital for Children, and in more ways than one.

On July 5, 2012, Arnold Palmer Hospital opened the doors of its operating room to the online community as the hospital live-streamed the open-heart surgery of young Emily Joy. Through the hospital’s various social channels, two marketing team members documented her heart surgery in real time using their smartphones, uploading the photos to Instagram.

The photos were then pushed to the hospital’s Twitter feed and Facebook page, as well as on its children’s health care blog, Illuminate, which was updated every few minutes.

With a mere 14 Facebook posts, the live coverage captured more than 218,000 unique views and more than 19,500 engaged users. There were also more than 2,500 viewers tuned in to the blog.

PR Daily reported that Michael Schmidt, director of digital media at Arnold Palmer Hospital for Children and one of the photographers during the event, read only one negative comment, which said that the surgery was too graphic.

“There were literally thousands of comments encouraging the family and wishing the little girl well,” Schmidt says.

Not only did the project help to set Arnold Palmer Hospital apart as an innovator in blending the realms of digital media and health care, but at the end of it all, it captured the hearts of audiences while granting a new one to a very special little girl.

“The payoff for them is that some other family is going to see this and gain a better understanding of what their family is facing,” said Schmidt.

An added payoff for Arnold Palmer Hospital for Children is being named the winner in the Best Social Media Campaign category of Ragan’s 2013 Health Care PR and Marketing Awards. 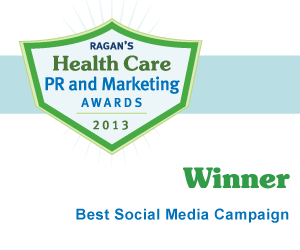