It might seem unfair to give a writing award to a piece that covers a never-before-attempted procedure on the father of an A-list celebrity.

That’s just what we’re doing, though—honoring a blog post that features the first-ever retrograde gene therapy, in which Blake Lively’s father received stem cells delivered to the heart in order to repair damaged muscles and arteries without invasive surgery.

We’re not starstruck, nor are we suckers for articles proclaiming a “first.” We are suckers for great writing, which characterizes this article that had us glued to the screen from start to finish. Even more, we’re suckers for clear goals and results that match.

In this case, the University of Utah’s Health Science Department of Public Affairs saw an opportunity to get attention for a hospital that usually isn’t on the mainstream media’s radar and win Ragan’s 2014 Health Care PR and Marketing Award for Best Article.

The post was part of a larger strategy designed to attract the attention of major news outlets on the coasts. Media relations staff used the post to pitch People magazine, which ran with the story that was also covered by CNN, US Weekly, the New York Daily News, the U.K.’s Daily Mail, and The Huffington Post, to name a few. The strategy paid off, resulting in 40 patient referrals in the first 10 hours the post was up; during the first week, website traffic grew by more than 500 percent. The article “drastically improved our national reputation as a player on cardiac issues,” according to the entry. 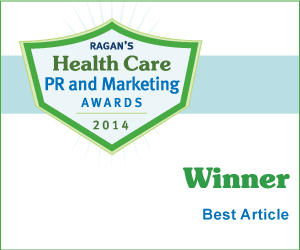