All too often, it’s easy for interviews to succumb to the temptation to resort to maudlin, syrupy stories in an attempt to appeal to people’s emotions.

Far too many of these interviews come off as contrived and manipulative. But a great story that screams to be told that also reaches people at a raw emotional level can have a profound impact.

Such is the case with Christine Pechera, who wasn’t expected to survive her diagnosis of non-Hodgkin’s lymphoma. Having always wished to see the Rose Parade in person, her family took her so she could experience it before she died.
While in Los Angeles, she decided to take one last chance at a cure and visited City of Hope, ultimately leading to her return to health. When City of Hope’s 2014 Rose Parade float was designed to carry patients who survived life-threatening illnesses thanks to City of Hope, Pechera was selected to be one of those waving at parade-goers from the Colorado Boulevard parade route.

Simply pointing the camera at Pechera would not have produced the emotional impact of this video; it took preparation, including working with her so she could convey her story naturally. The resulting video was shared through multiple channels, including social media and the official Rose Parade website. Designed to inspire charitable giving to the organization, the video produced the highest call-to-action click-through rate of any video in City of Hope’s history, with all views driven by organic engagement via social media.

We are pleased to award it the prize for Best Interview Video in Ragan’s 2014 Health Care PR and Marketing Awards. Produced at absolutely no expense, the video—and videographer Andy Featherston—exceeded expectations. Congratulations on a job well done. 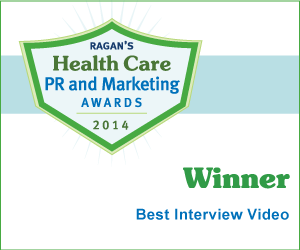