There is no understating the rise of visual communication. Many of the photos people take are shared on Facebook, while Instagram, Pinterest, and Tumblr have all gained prominence as social/visual networks.

Ruder Finn and its client, Novartis, with global campaign ambassador and world-renowned photographer Anne Geddes and global partner the Confederation of Meningitis Organizations (CoMO), tapped into this trend as the cornerstone of their effort to raise awareness of meningococcal disease, a horrifying illness that can kill within a day of onset, yet be prevented by a simple childhood vaccination.

To capture both the horrific aftermath of the disease for survivors as well as their strength and courage, the campaign focused on photographs by Anne Geddes, who captured portraits of 15 survivors and their families from multiple geographic locations. Deploying the images—along with well-crafted messages—through Facebook, Twitter, YouTube, and Tumblr proved extremely effective, and the effort was enhanced by a series of interview videos, a media relations campaign, and an e-book collection of the images.

The proof is in the results: At least one of the campaign’s key messages was contained in every story covering the campaign, while nearly 3,000 social media posts helped amplify the buzz. The free e-book, available through iTunes, was downloaded more than 12,000 times, and the videos were viewed more than 15,000 times. Most important, this entry didn’t stop at outputs. Rather, the campaign resulted in conversation among parents, survivors, medical professionals, and advocates, demonstrating that an original, image-based campaign can produce impressive outcomes.

Congratulations to Ruder Finn and Novartis Vaccines on their win in Ragan’s 2014 Health Care PR and Marketing Awards for Best PR Campaign. 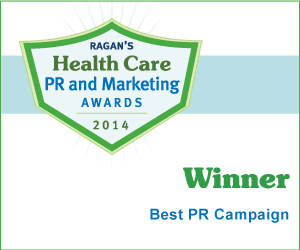