Alaska Airlines communicator Nancy Trott and AS webmaster David Henrich saw immense potential in the “employee comment” tool they built to engage employees. The result: Henrich created a new tool that allowed employees to vote up or down on questions asked at the airline’s town-hall style employee meetings, with the five questions getting the most “up” votes asked first. The achievement earned Alaska Airlines first place for “Best Online Discussion” in Ragan’s 2015 Intranet Awards.

The partners used Henrich’s comment tool three times before each employee town hall. Employees sent in a total of 222 questions that received 27,612 votes from just 14,000 employees. In Trott’s words, the solution was “an overwhelming success.”

There were several surprising benefits and side benefits:

Trott and Henrich used the tool before an announcement of new AS destinations to give employees a chance to be an “airline network planner for a day” and suggest new routes. Trott says, “Amazingly, three of the highest [employee-] ranked destinations were the very same destinations we were about to announce.” Trott adds, “That process helped instill pride of ownership among our employees, who really do know this business well.” 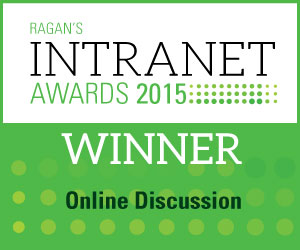