Of all the routine stories that run in the newsletter, magazine, or intranet, one of the most tedious to write—and to read—is the article warning employees they’ve broken (or are breaking) the rules. First you tell employees what they’re doing wrong. Then you say, “Don’t do this again,” and finally you re-iterate the penalties offenders will face.

Alaska Airlines found a way around all this. Communicators turned the dreary “rules” story into one of the most-read articles of the year on AS’s intranet, “Alaska’s World.” For that feat, Alaska has won the “Best Use of HR” category of Ragan’s 2015 Intranet Awards.

Internal comms worked with HR to co-produce an easy-to-read intranet story spiced with social media bits, photos, and humorous animated gifs. One example of how Alaska’s editors breathed new life into a conventional story: For the rule, “DO: Follow the dress code as outlined on the Travel Guidelines subsite,” the editors displayed a photo of an employee wearing bunny slippers and pajamas (decorated with sunglasses and twinkling stars) to illustrate unacceptable dress while flying on the organization’s dime.

In 2013, Alaska ran a traditional story in its employee magazine about the problem—with the usual uninspiring results. Here’s what happened in 2014: 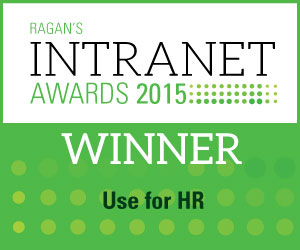