In the spring of 2011, MGH was contracted by a startup company, Reed Street Productions, to launch a new obstacle race: Run for Your Lives, a zombie-filled 5K adventure race.

“While zombies have become a popular culture sensation, most recently due to the popular show ‘The Walking Dead,’ the obstacle race scene had become quite a cluttered marketplace with popular races such as Warrior Dash and Spartan dominating the industry,” according to the winning entry.

Despite the fact that there was little local awareness about the event or pictures of what people could expect to see, MGH was able to sell out the first-time event with a marketing budget of $50,000. By aggressively pitching media outlets and nurturing major health partnerships, the team earned PR Daily’s 2012 Media Relations Award for Best PR Campaign – $50,000-$99,999.

The MGH team researched competitor obstacle courses and figured out which media outlets covered the races and events. It developed two press releases tailored to “lovers of the undead and fitness/running outlets,” according to the entry. It also targeted bloggers, print, radio, and television journalists. In addition, the team developed a charitable partnership with the American Red Cross in Maryland. The Centers for Disease Control and Prevention in Atlanta also promoted the event on its Twitter and Facebook accounts.

The team’s efforts secured about 200 media placements. More than 11,000 people participated in the race. Congratulations to MGH for making Run for Your Lives a success. 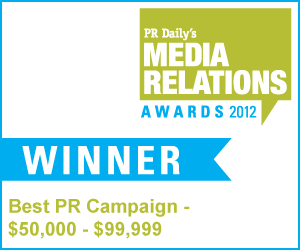