Everyone loves a good contest. But once it’s over, it usually falls out of the news.

That was far from the case for Hanson Dodge Creative (HDC).

The HDC team created a multiphased strategy once the official Nick Symmonds “Your Twitter Handle on an Olympian” contest closed in January 2012.

Symmonds auctioned off his right deltoid to the highest bidder, and the winner was to display his or her company name and Twitter handle on Symmonds’ shoulder. Sponsorship rules, however, made him cover up the tattoo during races.

Symmonds’ original plan was to tweet about the sponsor and mention the winner’s name during interviews.

Once HDC came on board, however, that all changed. The firm saw a great opportunity for more exposure, and its campaign strategy won it top honors in the Best PR Campaign – Under $24,999 category of PR Daily’s 2012 Media Relations Awards.

HDC tapped traditional and social media press, and built momentum throughout the calendar year through social updates and a video series leading up to the 2012 U.S. Olympic Trials (June) and into the Olympics (August). Once the Olympics ended, there were speaking opportunities for both Symmonds and HDC to showcase their partnership. 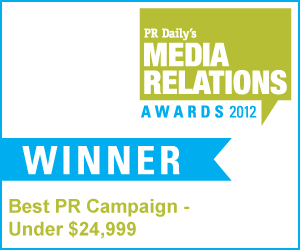