When AAA rolled out its June 2013 campaign designed to put a stop to distracted driving, it went all-out.

First there was the extremely thorough press release, written in a very readable, informative style. Then there were all the supplements: an infographic, a fact sheet, videos for broadcast and the Web, a full research report, even a sample letter to an automaker about the issue. It put an article in the club magazine. It included a social media campaign on Facebook and Twitter. Then there was the press conference.

AAA showcased its research results on a “test track” in the parking lot at FedEx Field in Washington, D.C. Reporters had the opportunity to test-drive cars outfitted with devices that show just how dangerous distracted driving is. Cameras recorded driver responses, and an electroencephalographic skullcap monitored drivers’ brain activity. The “show and tell” approach made an impact: The association earned 5,526 news clips and air time on 492 news stations.

For its wide-reaching approach to getting the word out on a major issue, AAA is the winner of the Best Issue/Cause Advocacy category in PR Daily’s 2013 Media Relations Awards. 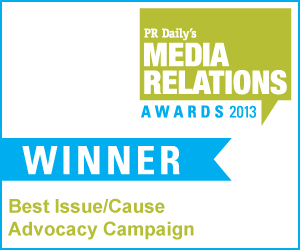