For years, conventional medicine minimized the problem of pediatric pain—essentially by refusing to take it seriously.

The response of many pediatricians to undiagnosed aches, sweats, fevers, and shooting pains has been, “Young man, your pain is all in your head.”

Now at last a U.S. hospital, the Children’s National Medical Center (CNMC) in Washington, D.C., has taken aim at chronic pediatric pain, which may afflict as many as one-fourth to almost one-half of children under 18. These victims may feel pain daily for more than three months.

Weber Shandwick’s goal was to get local and national media to cover the opening of the PPMCC to show how the complex furthered children’s health and scientific research into pediatric pain with video gaming in its clinic—a new method not used by any other pediatric hospital.

Weber Shandwick was so successful in its publicity for the opening of PPMCC that it won top honors in the Best Press Event/Media Tour category of PR Daily’s 2013 Media Relations Awards.

The team’s strategy: Pitch embargoed, targeted stories to national media, and put on a grand opening event for PPMCC for the D.C.-area press, local TV, and health care trade reporters.

Weber Shandwick team members trained three to four doctors to act as spokespersons at the opening event. They recruited patients who would be willing to speak with reporters about their treatment. And they set up live shows of video game technology for the media and patient-centered tours of the complex.

PPMCC’s gamification therapeutic technology was so new there was no peer-reviewed research of its efficacy. Such studies were still in progress. New, too, was the pain-monitoring software that quantifies children’s pain.

The Weber Shandwick team also coordinated one-on-one tours of the PPMCC facility for the reporters and television crews, and set up interviews with patients and their families as well as with the doctors and physical therapists.

The staff members on this project for Weber Shandwick were Eric Hoffman and Jessie duPont. 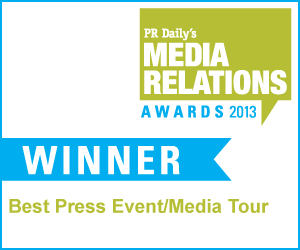