All babies cry. But when an otherwise healthy infant cries for more than three hours a day, three days a week, for three weeks, that’s colic. The causes are unknown. During National Colic Month in March, a company called Born Free wanted to raise awareness of its Born Free Bottles and feeding system aids as a solution for sleep-deprived parents. With the help of Hollywood Public Relations, they enlisted the aid of TV personality Giuliana Rancic—resulting in Hollywood PR’s first-place win in the category of Best Use of a Celebrity or Personality in PR Daily’s 2013 Media Relations Awards.

Rancic was chosen because she was a fan of the Born Free brand, after a struggle with breast cancer and surrogate pregnancy that left her with no choice but to bottle-feed her newborn son. The team felt that Rancic’s endorsement would mollify the debate regarding bottle-feeding vs. breast-feeding and allow the coverage to focus on the product’s key attribute of reducing colic.

Other results of the campaign included:

And most importantly, the client realized a double-digit bump in sales immediately at the end of March.

Hollywood Public Relations’ Darlene Hollywood, Courtney Curzi, Meg Parker, and Kim Mackenzie should be able to sleep happily with those results and their first-place award. 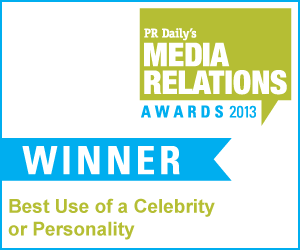