When it comes to alcohol, many of us are lucky enough if it gives us more than just a hangover come the next morning.

It would seem Diageo had higher aspirations, though, which is precisely why it set out to change things with a new campaign aimed at giving back to the community.

Under Dialogue’s leadership, the worldwide spirits distiller launched its “Tiempo para Compartir” movement. Translated as “Time to Share,” the campaign invited brand loyalists of Buchanan’s blended Scotch whisky throughout Colombia, Mexico, and Venezuela to “share themselves.”

Although these Latin American consumers were already accustomed to giving charitably, actual volunteerism was a new concept for many of them due to a lack of organization, security issues, as well as various family and time constraints.

The new concept was deeply rooted in Buchanan’s commitment to inspiring its drinkers “to leave a mark.”

Testing the concept first, pilot projects proved to be a success, with hundreds of Diageo’s own employees actively participating. These test runs helped set the tone that those inside the brand were “walking the talk” alongside its consumers.

By March 2012, it was time to officially launch the “Share Yourself” campaign.

This engagement model greatly rested on the notion of celebrating the effort’s volunteers and their goodwill with live music events, including concerts featuring the Smashing Pumpkins and Maroon 5.

Fueling progress while keeping consumers abreast with all the latest happenings from the movement, Dialogue’s regional communications teams constantly updated participants and prospective helpers on the campaign’s newest projects and successes, highlighting influencers who volunteered, those who benefited from their help, and the most recent music artists to join.

After three months of recruitment efforts, the campaign had recruited 6,500 volunteers participating across the three markets, amounting to 26,000 hours of community service given to dozens of community projects.

On behalf of those communities and the people who benefited, we’d like to do more than raise our glass to Diageo and the work of Dialogue. It’s our pleasure to honor their volunteer efforts by naming the Buchanan’s “Share Yourself” campaign PR Daily’s 2013 Media Relations Campaign of the Year. 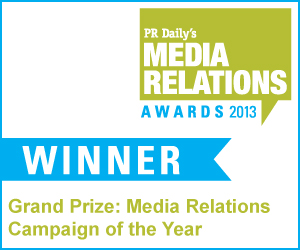