The film series “EXPOSED: The Race Against Tuberculosis” powerfully communicates the urgency of tuberculosis as one of the globe’s deadliest infectious diseases, an epidemic that is growing worse as strains of TB develop drug resistance.

Through compelling storytelling and interviews with individuals around the world who are struggling with the disease or attempting to treat it, the series demonstrates the need for developing new tuberculosis vaccines. Viewers meet a Tennessee woman who survives multidrug-resistant tuberculosis; a South African mother who volunteers in a clinical trial for a new TB vaccine; and a U.K. scientific researcher who’s working tirelessly to develop an effective vaccine. By using personal stories, the film attempts to convince decision makers in a wide variety of target audiences to act to prevent this global epidemic. It also serves as a fundraising tool, aimed at high-income and emerging economy countries that could provide vital funding for vaccine development.

The series was constructed in four chapters to be used over a prolonged campaign, kicked off with a highly viewed trailer that coincided with World TB Day 2013. A microsite, robust social media campaign, and personal outreach to international organizations bolstered dissemination efforts.

The film series received more than 80,000 views and has generated blogs and media coverage. Chapters in the series have been viewed at more than a dozen conferences and events by high-level decision makers in target funding areas with the hope of inspiring momentum to end the global epidemic of tuberculosis.

Aeras wins the prize for Best Issue/Cause Advocacy Campaign in PR Daily’s 2014 Media Relations Awards for its use of compelling storytelling to advance a globally important cause. Congratulations to the Aeras team of Kari Stoever, Jamie Rosen, Annmarie Leadman, Melody Kennell, Rosella Anstine, and Jennifer Woolley. 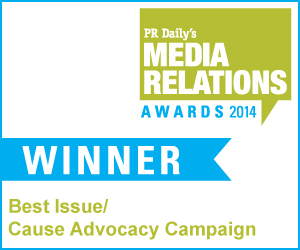