You don’t want to get into a PR contest with Southwest Airlines. But that’s what Hill+Knowlton Strategies and Virgin America did when the U.S. Department of Justice ordered American Airlines in late 2013 to release hundreds of gates around the nation to bidding by low-cost airlines. Delta, Virgin, and SWA all went after the two gates at Dallas’ Love Field.

For its good-humored, high-pressure, imaginative work for Virgin that resulted in victory—a triumph that rode on hundreds of millions of favorable media impressions—Hill+Knowlton Strategies wins top honors in the Best Press Event/Media Tour category of PR Daily’s 2014 Media Relations Awards.

Given SWA’s influence in Dallas, the fact that the public identified Southwest with Love Field, and Southwest’s incorporation of Love Field as a big part of its brand (it touts its “LUVing corporate culture”), Virgin faced an uphill battle to convince the Dallas city manager to award it the gates.

Virgin hired Hill+Knowlton’s Dallas branch to develop a local media list pronto, schedule the opening press conference of the campaign for the two gates, and organize media interviews with Virgin CEO David Cush and Chairman of the Board Don Carty.

Cush would also speak at the press conference and “open plane” event for local media and supporters at a Love Field hangar, where Virgin began selling tickets from Love Field to cities in the U.S. good after Oct. 13, 2014, when the Wright Amendment expired. (The 1979 Wright Amendment had largely limited air traffic out of Love Field to destinations in Texas.)

Was there ever a doubt? On May 12, 2014, only three weeks after the start of this media blitzkrieg, Dallas’ city manager announced that Virgin had won the gates. In those three weeks, Hill+Knowlton and Virgin had mounted a terrific assault that routed and overwhelmed the enemy:
• The Love Field ticket announcement and press conference sparked 125 million media impressions and $6.6 million in advertising value equivalency.
• The “Free Love Field” rally and the city manager’s decision earned 240 million media impressions and almost $16 million in AVE.
• Virgin America was the subject of hundreds of positive print, wire, online, and broadcast stories and social media hits, many sparked by Hill+Knowlton’s unremitting online push. 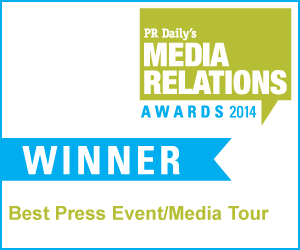