It doesn’t take all that much to get people interested in cute animals, but research studies about the migration patterns of zebras? Those may take a little more effort to grab people’s attention.

The World Wildlife Fund pulled that off and then some with its press release announcing the discovery of Africa’s longest-known terrestrial wildlife migration. Researchers discovered a 300-mile path traveled by thousands of zebras.

The release gets right to the heart of the matter, explaining why the research is important, just how notable this discovery really is, and how the researchers did it, using GPS-equipped collars. Further down, the release explains how migration patterns throughout the world are in danger because of man-made obstructions such as fences.

The directness of the message, the importance of the discovery, and a few multimedia elements, including a video of the collaring process, resulted in more than 100 stories in publications including The New York Times, National Geographic, Smithsonian, Slate, and on CBS News. The impact of the message is what makes the WWF’s release the winner of the Best Press Release/Story Pitch category in PR Daily’s 2014 Media Relations Awards.

The attention the release brought resulted in the study being the No. 1 paper ever published in the journal Oryx. In fact, it’s one of the most-read journal articles ever. That is quite an accomplishment. 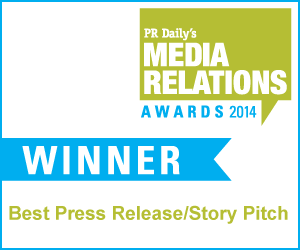