For Georgia Power, the multiday ice storm that struck Georgia on Feb. 12, 2014, wasn’t just a freak weather event. It was a several-days-long marathon to keep the power company’s reputation intact.

The team’s goals during the storm were to conduct proactive and consistent communication with media outlets throughout Georgia, and to maintain a positive tone around power restoration efforts for as long as possible.

Team members began contacting the media the day before the storm. They explained how Georgia Power was prepared for widespread damage, and they shared safety tips and customer resources, like outage maps. The team also created a 24-hour media staging area at Georgia Power’s headquarters for interviews.

But the team didn’t just focus on media outreach. Team members posted dozens of Facebook updates and more than 100 tweets to show customers Georgia Power’s restoration efforts, the extent of the damage, links to resources, and more. These updates limited the number of customer calls to both Georgia Power and the media asking for updates.

When the team evaluated its efforts after the storm, it determined 95 percent of media coverage surrounding Georgia Power was either neutral or positive. Mission accomplished. 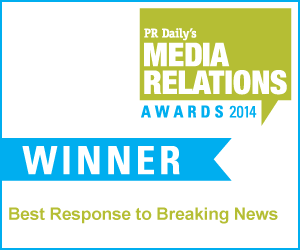