But only 10 percent of students in the mechatronics program are women.

KTH, determined to increase its number of female applicants to the program, decided Swedish pop star Robyn would be the perfect role model to inspire women to consider a career in mechatronics and other technologies.

Since Robyn’s songs include references to robots, a team of nine students decided to build her a dancing robot as a digital tribute.

The team sent Robyn messages with the following YouTube video, which explained that The Robot Project was “a celebration of Robyn, and people who go their own way”:

Robyn emailed the team within two weeks. She didn’t just reply to the technological ode, either; she became an active part of the project. Robyn visited the student team and proved she was the perfect role model for future female students when she said:

“I think it’s important that women get to do whatever they want. And if they want to become engineers, then they should. And I think sometimes what’s tricky is that a lot of girls maybe don’t realize that they’re interested in technology because it’s not presented as something they could be interested in.”

More than 15 million people were reached worldwide, and KTH gained 30 percent more female followers on its Facebook page. Thousands of people read KTH blog posts and articles in publications such as PitchFork and Wired about The Robot Project. Even more people talked about it across social media.

Most important, KTH saw female technical applicants grow from 8 percent to 15 percent within the year, and received more than 1,500 more applications within that time. For its remarkable feat, we award KTH the prize for Best Use of a Celebrity or Personality in PR Daily’s 2014 Media Relations Awards. 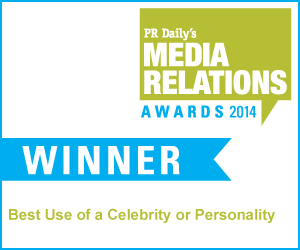