You’ve seen it—in fact, you’ve probably done it: Walked down the street with your eyes glued to the screen of your smartphone while texting, reading or watching a video. Although distracted driving is the cause of many injuries, members of the American Academy of Orthopaedic Surgeons (AAOS) have seen an increase in the number of patients injured due to distracted walking.  For “Digital Deadwalkers,” a campaign that delivered measurable results and saved a lot of people a lot of pain and misery, AAOS has won first place in the “Cause Advocacy Campaign” category of PR Daily’s 2016 Media Relations Awards.

AAOS launched “Digital Deadwalkers” to raise awareness of the problem and influence people to keep their eyes on the sidewalk. TV and radio ads at the heart of the campaign challenged people to engage with their surroundings. These ads, available in 60-, 30- and 15-second packages ,were distributed to thousands of cable, television and radio stations across the country, serving up a call to action prompting viewers and listeners to visit a dedicated landing page at OrthoInfo.org/DistractedPedestrians.

The campaign produced impressive results, including national and local media coverage that featured most of the top-tier press outlets: The New York Times, The Washington Post, “CBS This Morning,” NBC News and more. 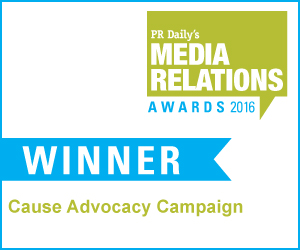