If you pay attention to data breaches and IT security, organizations like Rapid7, Symantec, and Proofpoint probably leap to mind first. These were the organizations journalists turned to when data breaches made news. March Communications was tasked with turning that situation around for Mimecast, a 14-year-old email security organization that began trading on the NASDAQ exchange in November 2015. Its successful effort has earned it first place in the “Thought Leadership Campaign” category of PR Daily’s 2017 Media Relations Awards.

The work began with an audit of articles that covered previous breaches to learn the characteristics of a good rapid response commentary. March researched the journalists who reported these stories and developed a list of reporters for whom Mimecast would tailor commentary to best align with their beats.

Media trading cards were one of the more innovative aspects of March’s work. The cards, made available to the executives who were being positioned as thought leaders, covered insights about key journalists, such as the kind of commentary they would be most likely to include in their coverage.

With leaders prepared and lists built, it was now a matter of being first to journalists with invitations to talk to Mimecast executives when relevant news broke. In addition to monitoring media, the company’s U.K. communications manager produced a daily digest of news that was waiting when execs showed up for work in the U.S.

The effort resulted in 30 placements and a 1033 percent increase in rapid response coverage compared to the previous six months. Six spokespersons were interviewed, and the organization began receiving at least one inbound request per week for Mimecast commentary on news or security topics. 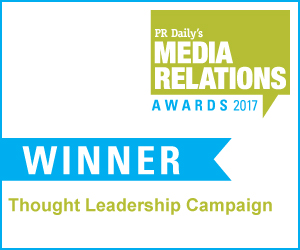