Consumer electronics organization LG had a new line of home audio products to introduce in 2017. Of course, so did every other manufacturer of home audio products, so earning news and influencer coverage would be a challenge. PR agency Ogilvy was up to the task—and it’s won first place in the “Press Tour or Event” category of PR Daily’s 2018 Media Relations Awards.

Ogilvy envisioned a must-attend event that would draw lifestyle journalists and social media influencers to come take a look—and a listen. The enticement came by way of food. The team partnered with chef Dale Talde, formerly of Top Chef, to host an event in the Flatiron Penthouse in New York City.

Talde prepared small-bite plates paired with music that would be played over LG gear. The food and audio equipment was spread out through four of the penthouse rooms, each decorated to reflect the music style that would be played there. Before each item was served, Talde explained how music inspired the recipe; LG, meanwhile, paired each item with a different product.

Talde promoted the event across his well-subscribed social media channels while Ogilvy undertook the pitching. The 40-plus guests for the evening were greeted with a map of the venue and product locations along with the menu. Among the guests were lifestyle journalists for Billboard, Food & Wine, Essence, O, Good Housekeeping, Cosmopolitan and more.

Ultimately the event sparked more than 300 placements and close to 250 million impressions.

Congratulations to the team of Will Tsang, Nick Iverson, Jen Langione, Re Kleinbard (from Ogilvy) and Chris DeMaria (from LG). 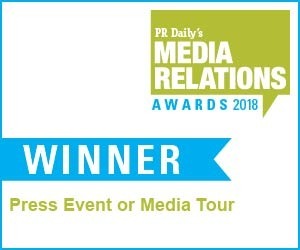