The kind of research Plan International’s communications representatives and PR agency wanted to conduct isn’t cheap. The idea was to survey youths ages 10–19 about their views and experiences with gender-based norms and perceptions. Because these kinds of surveys require parental permissions, they are typically costlier than others. Plan International—with its interest in children’s rights and equality for girls—opted to cover the costs, which enabled the team to develop a media campaign that has earned first place in the “Media Relations Campaign Over $50,000” category of PR Daily’s Media Relations Awards.

The first phase of the media effort produced exclusive coverage of the survey results in The New York Times. A week before that article was set to appear, the team invited a broad list of reporters to a telebriefing scheduled a short time before the article publication date.

The telebriefing featured Plan’s CEO, who offered an overview of the survey findings and what they meant to girls and the #MeToo movement. The CEO was joined by a girl and boy who shared their own gender experiences and discussed what they do to fight for gender equality. The team distributed a press release after the telebriefing.

In the second phase, the team used specific survey findings to tailor pitches to media outlets. One of the themes, for example, was rethinking gift giving during the holidays with gender-neutral toys; another was the record number of women running for office. Each theme was bolstered by survey results. The team also jumped on breaking news to share relevant survey information. 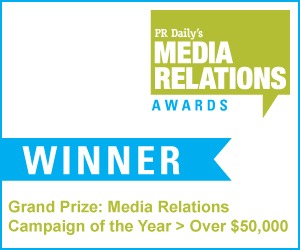