Rabobank is well known across Europe as a consumer bank. In North America, though, its role is strictly B2B in the agriculture industry. Seeking to expand its customer base, the bank and its PR agency, CBD Marketing, took a thought leadership approach to building awareness of its strengths. The success of the effort has earned Rabobank and CBD first place in the “Thought Leadership Campaign” category of PR Daily’s Media Relations Awards.

A social listening effort and other research allowed the team to build a profile of each key competitor that focused on their media coverage, areas of expertise, social media presence, web site content, tone of voice and target audiences. This research enabled the team to find opportunities to use bank research analysts to share insights with media outlets, resulting in development of a thought leadership strategy.

The strategy took two key approaches: media outreach and social media, all targeting C-suite and executive decision makers at the bank’s North American clients and prospects. On the media side, the team targeted the “Big Five”—Reuters, The Wall Street Journal, the Financial Times, Bloomberg and The New York Times (in addition to other influential outlets). For social media, the team aimed to build audiences and engagement on Twitter and LinkedIn.

Newsjacking was one of the primary means by which the team was able to connect analysts with journalists, getting interviews around Keurig’s merger with Dr. Pepper Snapple and the impact of NAFTA negotiations on the dairy industry. The team also used trendspotting to earn coverage around the growing popularity of sparkling water, among other topics.

The campaign delivered 66 media interviews, including 41 with “Big Five” outlets, resulting in 74 earned placements. The bank also saw a 49% increase in its LinkedIn follower count. 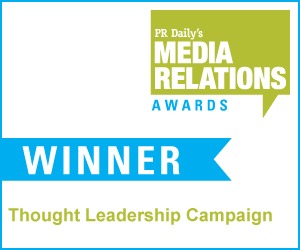