The winners of the first-ever PR Daily Digital PR and Social Media Awards are diverse—they include a couple of nonprofits, one of the world’s largest automakers, several PR firms, a casino, an airline, and a bitchin’ kitchen.

Despite their differences, all of the winners share a common trait: They were bold.

Whether it was a tech company’s bold attempt to hijack its competitor’s conference or a nonprofit communicator’s bold reporting trip to the Horn of Africa, the winners reveal a courageous streak among PR and marketing people in the digital age—it’s a brave new world, and they’re not afraid to dive in.

Thanks to everyone who took part in the awards—and thanks for being part of the PR Daily community. Now sit back and learn why these winners finished at the head of a tight pack. 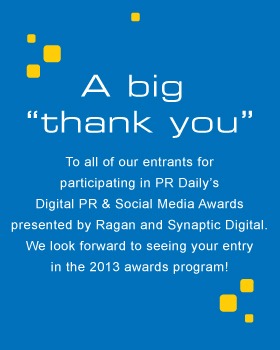 WINNER
The Clorox Company and Ketchum

Best Relaunch or Redesign of a Site

Best Use of Digital or Social Media for Media Relations

Best Use of SEO

WINNER
CRT/tanaka and The Federation of Quebec Maple Syrup Producers