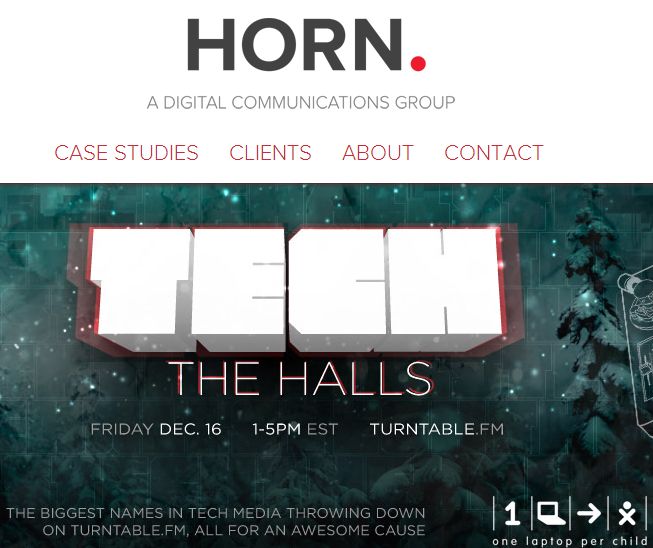 But can they spin music?

That’s the question digital communications agency HORN wanted to find out. For its month-long campaign, it turned 14 top reporters into disc jockeys and helped raise $10,000 for the nonprofit One Laptop Per Child. HORN wins the award for Best Event or Stunt in PR Daily’s Digital PR & Social Media Awards because the agency brought together several different industries, all in the spirit of helping one charity.

This event was part of HORN’s holiday campaign, Tech the Halls, a national fundraiser for One Laptop Per Child. HORN teamed up with the nonprofit and a music startup, Turntable.fm, a social listening platform that lets users DJ online together.

HORN brought together the reporters for a nationwide music competition for one day, with reporters competing head-to-head for the charity. The event raised $10,000, which is enough money to provide 50 laptops for students with disabilities.

1.No reporter likes to be “pitched” over the holidays.
2.HORN is an agency—and why would anyone, especially the media, want to go to an agency event?

The agency recruited reporters from top publications such as Advertising Age, Adweek, and Fast Company. These journalists would compete for a one-day industry “battle royale,” with the journalists squared against each other. Audience members would vote on the best DJ.

Before the competition, HORN conducted a month-long fundraiser for One Laptop Per Child. To highlight the event, the agency started with Twitter and created a calendar of tweets, showcasing matchups, fundraising updates, and information, under the #techthehalls hashtag. Also, on Twitter, users could see two custom landing pages—one for DJ battles and another for people to donate.

Then, after a month of fundraising, it was time for the DJs to go head-to-head. People were able to vote for their favorite DJs (and they could also vote from a live chat function). All DJ battles were held in specially designed DJ rooms, which was a bonus for HORN because the agency’s branding was quite visible.

Was it a success?

• HORN enjoyed increased visibility, including editorial coverage in Advertising Age, Billboard, Newsweek, The Next Web, PRNewser, TechCrunch, and Wired.
• Tech the Halls tweets reached a network of nearly 5 million users, thanks to coverage from TechCrunch, AdFreak, Advertising Age, Fast Company, Gizmodo, Men’s Fitness, MediaPost, The Next Web, and Wired.
• More than 2,500 listeners tuned in (significant, as each DJ room can only hold 200 users at a time).
• The nonprofit raised $10,000, all through crowdsourcing.

Perhaps the most significant result was the demonstration of what the PR industry can accomplish when it works together with other agencies.

“By partnering with non-clients, crowdsourcing fundraising, turning reporters into DJs, HORN successfully created a never-before-done event, uniting peers and competitors alike for a tremendous cause, and exemplifying the creativity, execution, and impact that define an award-winning campaign,” Lee says.

We agree. Congratulations on your award. 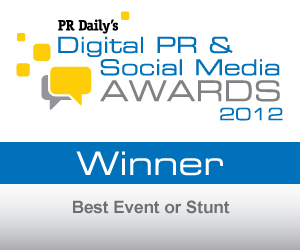