Imagine you’re at the U.S. Department of Energy (DOE) looking to tell the story of affordable, clean energy living, and helping to build America’s clean energy workforce of the future.  How would you bring that vision to life?

Enter Solar Decathlon, a biennial competition of college students from 20 teams of U.S. and foreign institutions of higher learning who strive to build the best-looking, most energy-efficient, most affordable house.

Twenty real houses. Houses people could live in, cook in, sleep in, get warm in, for the 10 days the judging goes on.

As the nation searched for cost-saving options, job opportunities and energy security solutions, DOE partnered with Stratacomm, LLC, a strategic communications firm based in Washington, D.C., to emphasize the affordability, accessibility and impact of clean energy products and tell the story of the collegiate teams to the world.

The team brought the Solar Decathlon to life online, including the following achievements:

With teams coming from four continents and five countries, all Solar Decathlon fans weren’t able to make it onsite to tour the houses. Here’s how Stratacomm and DOE helped fans across the country and around the world experience the competition online:

• They encouraged the student contestants to serve as spokespeople, telling their own unique stories through media and social media.
• They prewrote 1,000+ posts to appear on Facebook, Twitter, YouTube, and Flickr in the eight months before the live house display.
• They then used these 1,000+ posts to double as an editorial calendar and ensured a steady flow of interactive content.
• They introduced QR codes and Foursquare check-ins throughout the Solar Village.
• They set up two TweetChats and a live blogger and media webcast to let online audiences see and talk to student contestants and DOE reps.
• They posted daily captioned photos on Facebook, Flickr, newswires, and SolarDecathlon.gov.
• They encouraged student teams to shoot video and computer-animated walkthroughs of their houses.
• They created an overview video and online virtual tours of each house for the DOE’s YouTube channel and SolarDecathlon.gov.
• They built a content-rich online press room and a media guide featuring tips for reporters on what to cover. 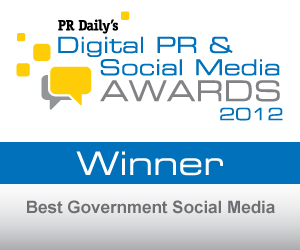