What grabbed our attention about this entry was powerful storytelling—both from the communicator herself and the people she reported about.

Mindy Mizell, World Vision media relations director, was sent to the Horn of Africa as a communicator representing World Vision’s emergency response team to the drought and famine crisis. She traveled throughout the region from July to September, only carrying a laptop, a lavaliere microphone, and a hand-held Flip camera. For this intrepid communications idea, we award World Vision with top honors in the Best Location-Based Campaign category of PR Daily’s Digital PR & Social Media Awards.

Even though her communications equipment was limited, Mizell was able to launch new and innovative social media sites for World Vision’s response team to tell untold stories about Somali refugees.

“What I didn’t expect to learn was that social media sites let me tell the ‘raw’ stories in nearly real time straight from the front lines of the crisis in a way that our staff learned what Somali children really had to say about the harsh realities of the crisis, without the spin or bias of marketing,” Mizell says.

She produced more than 40 Flip cam videos that were uploaded within hours. Many of the videos were targeted to donors or potential donors around the world, including churches that eventually provided more than $1 million in funding due to the social media content that was exposing the crisis, Mizell says.

Here’s a look at what Mizell was able to accomplish during her time:

• World Vision’s Facebook page was for its aid workers deployed to the Horn of Africa, to upload social media content directly from the front lines.
• The blog served as a one-stop shop for accessing many other blogs, vlogs, and videos that were provided.
• This real-time interview with a Somali child in a refugee camp was shared on Facebook and Twitter.
• These videos were sent directly to churches, urging donors to contribute to the response effort. Take a look here to see all 40 unedited videos.

Congratulations on your award and your ability to share such powerful stories, World Vision. 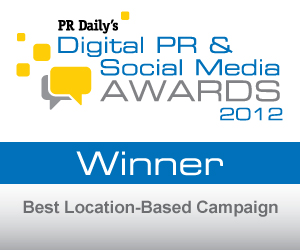