If you’re trying to launch a viral campaign, it helps to have a 25-year head start.

Early in 2012, American Honda tapped in to the established buzz about the 25th anniversary of the iconic movie “Ferris Bueller’s Day Off” to promote its CR-V model to young drivers. Who better, after all, to convey a sense of freedom and fun than Mr. Do Everything in One Fantastic Day, Ferris Bueller himself—or, more accurately, his portrayer, Matthew Broderick.

The “Matthew’s Day Off” promotion turned back the proverbial odometer and had Broderick cruising in the newly redesigned CR-V, replete with music from and other homages to the original movie.

The campaign included a Super Bowl commercial, which was heralded by a YouTube teaser with a twist: The 10-second spot was unbranded. It generated a torrent of speculation that Honda was behind it.

If less is more, then nothing was everything.

Then, the Monday before the Super Bowl, when its 60-second ad would air, Honda posted extended versions of the commercial on Honda sites and on YouTube.

Honda wasn’t done, though. It hid in the extended version what company officials described as “Easter eggs”—little prizes for “Bueller” aficionados to hunt for. There were references to the original movie, and devotees were encouraged—and many needed little, if any, prompting—to identify them. Many were obvious, but some were as subtle as the appearance of Ferris’s vest in a store window.

“Honda website traffic tripled during the Super Bowl activity. Honda was the most-viewed Super Bowl video online, the No. 1 trending video on YouTube, and the No. 1 shared commercial on Facebook and Twitter, and overall gained more than 2.5 billion PR impressions.”

The campaign, clearly, took on a life of its own—the essence of a viral campaign.

Kudos to the creative teams at American Honda and RPA for developing a campaign that was “so choice.”

If you’d like to watch the extended video—and hunt for the “Easter eggs”—click here: http://www.youtube.com/watch?v=VhkDdayA4iA

Want to get recognized for your hard work? Find out about Ragan and PR Daily’s award programs here: http://www.prdaily.com/Main/RaganAwardsPrograms.aspx 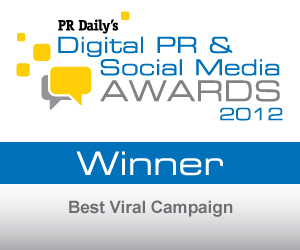