Buying previously owned vehicles isn’t popular in China because of a lack of trust in the vehicles and their sellers. A campaign by PR agency Genedigi to reverse this trend is the first-place winner in the “PR Campaigns” category of PR Daily’s 2016 Digital PR and Social Media Award.

The campaign, “30 Million Reasons to Use Xin.com,” was designed to create awareness of Xin.com, a Chinese website for purchasing used cars (the site’s profile was practically nil). The ad—a significant spend involving multiple celebrities—kicked off an online debate via social media that drew in an extraordinary number of participants, elevating the site’s presence and reputation.

A concurrent public relations campaign supported the ad and subsequent online activities. It began with the distribution of press releases and backgrounders immediately following airing of the commercial (and not a second before, to maintain the element of surprise). Outreach also began immediately to key opinion leaders, who participated in the online debates.

Combined with other, non-PR activities, the campaign generated a half billion impressions and racked up a laundry list of other impressive numbers. Given similarly large budgets, the campaign is a model for other companies seeking to leverage traditional and social media to spark genuine conversation and improve the prospects for a previously unknown business. 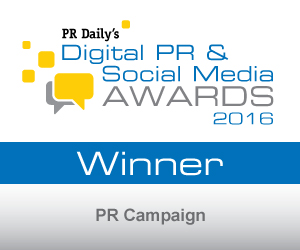