Infrastructure can be as dry as dust. Stories about the roads, tunnels and power supplies required for societies to function aren’t at the top of many people’s recreational reading lists. The Spanish multinational infrastructure organization Ferrovial aimed to change that with a blog that would attract readers from across its range of stakeholders (which includes investors, journalists, clients, employees and people with an interest in the topic). Its efforts have earned it first place in the “Blog” category of PR Daily’s 2018 Digital PR & Social Media awards.

The organization adopted a multichannel approach, with content housed on its blog but also shared across social media (notably Facebook, Twitter, LinkedIn and Instagram), not just as a means of driving traffic to the blog but also to inspire engagement in the social networks themselves. The blog team dove into the analytics accessible through various platforms to gain deeper insights into readers’ preferences. It also tapped into trending topics and hashtags to ride the wave of popular content at any given moment.

For instance, one post focused on #PiDay (many of Ferrovial’s readers are engineers, after all) while another featured a Spotify playlist on #WorldRockDay with songs about infrastructure (it turns out there are a lot of songs about streets). The team adopted a less stodgy style than the rest of the industry, producing a compelling post about megatunnels that attracted more than 50,000 visits and inspired a sequel. 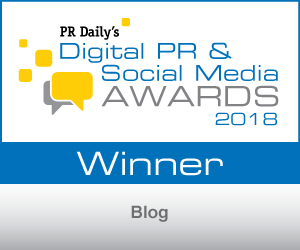