The popularity of live events hosted by tech organizations has grown over the years, with the likes of Dreamforce, Salesforce and Dell World jumping onto the bandwagon. Cisco Systems is no exception. Cisco Live attracts thousands of people from around the world every year. To extend awareness of Cisco Live and deliver its insights to a wider audience, Cisco developed a program that encouraged attendees to blog about it. Its success has won Cisco first place in the “Influencer Marketing Campaign” category of PR Daily’s 2018 Digital PR & Social Media Awards.

Twenty-nine influencers opted in to the program and were rewarded with prizes and recognition from the Cisco team for the 41 posts they created. The program was promoted well in advance with a contest that encouraged prospects to explore how they could participate during Cisco Live.

Prior to the event, Cisco delivered “scoops” to the volunteer bloggers so they could reveal information to their readers.The posts from the blogger corps produced 518 tracked clicks on the links they included to Cisco Live, along with $221,620 in tracked revenue. The influencers contributed to the 91,300 mentions and nearly 1 billion impressions Cisco Live generated online.

Of course, what matters in influencer marketing is the credibility that accompanies third-party testimonials from credible sources, which the participants in the program delivered. Unpaid influencers who chose to participate could showcase attendee enthusiasm for the event and promote the exchange of information among attendees “that leads to a richer, more relevant, and more authentic event experience,” in the words of Kathleen Mudge, who managed the program.

Congratulation to Kathleen Mudge for her winning achievement. 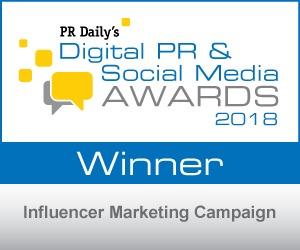