Thousands of homes in its Massachusetts service area were overpressurized with natural gas—a widespread safety hazard.

More than 5,000 workers had to immediately replace 47 miles of pipeline, along with gas appliances and furnaces in more than 8,000 homes.

Beyond that, Columbia had to communicate with customers in a much more personal and time-sensitive way than ever before, so it turned to NickersonPR for a salient social media strategy.

The comms team used Facebook and Twitter to identify general questions to be answered. The two platforms became hubs for consumers to get up-to-the-minute, accurate information on every aspect of the effort. NickersonPR developed the content and planned the scheduled posts to create a continuous flow of information.

For their communication teamwork during the challenge, Columbia Gas and its messaging partner, NickersonPR, have won first place in the “Crisis Communication or Reputation Management” category of PR Daily’s Digital PR & Social Media Awards.

During the crisis, each member of the 12-person social media and intelligence team had specific jobs and daily tasks to ensure total and comprehensive coverage. The social media monitoring and campaign included monitoring of public, private and all government (local, state and national) outlets and was reported in an extremely detailed document at the end of each day.

Providing each post and video in English and Spanish increased engagement and ensured the messaging could be understood by all in the affected communities. Finally, being present at all community events fostered connections and relationships with the communities and local and state government officials, increasing trust and collaboration. 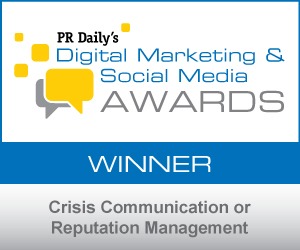