Northern Arizona University (NAU) found a way to build engagement among its student population at a time when engagement on social media was declining. For identifying and using themed GIFs to drive engagement, NAU has won first place in the new “Instagram Stories” category of PR Daily’s 2019 Digital Marketing & Social Media Awards.

Through social media, NAU seeks to tell the story of its “Louie the Lumberjack” mascot in ways that encourage students and others to tell their own stories. GIF stickers let Instagram users add GIFs to their Instagram Stories to add a visually arresting dimension to the images and videos they share.

The NAU social media team, aware that GIFs were now available in Stories, recognized the potential to build greater awareness by developing unique NAU GIFs. To take advantage of the opportunity, the team revamped its Giphy channel and adapted its social media strategy to align with Instagram Story updates.

The GIF sticker packs were initially unveiled with a “Back to NAU” theme. The GIFs harnessed popular cultural references; the 8-bit Louie the Lumberjack mascot was configured to look like Super Mario; the GIFs have him (for example) hitting boxes to unpack his belongings.

The second GIF sticker pack focused on “Game Day-Ready,” and another collection focused on prospective students showcasing their decision to attend NAU (accompanied by the hashtag #NAUSaidYes). The team also added question stickers to its “My Life in 5” Story, a student takeover program.

The GIF stickers drew 13.5 million views in one month; overall, they have been viewed 92.4 million times, an impressive achievement for a university. 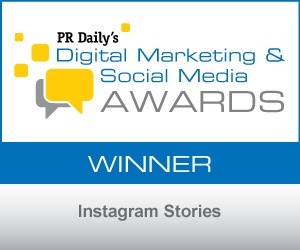