The quote “If I had more time, I would have written a shorter letter” is attributed to many famous people, but no matter who said it, the point remains the same: It’s difficult to tell a story concisely.

It’s even more difficult to tell a story when it explains a complicated and highly technical topic, like homeland security systems.

However, the team at Trainer Communications made the difficult look easy when it created a company overview video for Qylur Security Systems, a homeland security technology company. For creating such a compelling and informative video, Trainer Communications earned first place in the Best Company Overview Video category of PR Daily’s 2013 Video Awards.

The video begins with a clip of Lisa Dolev, Qylur’s founder and CEO, describing how upset she was when the Madrid bombings occurred in 2004. She describes how the bombings prompted her to create technology that could prevent such a tragedy from happening again. “At that moment I said, ‘We have to do something about that,’” Dolev says.

In the first 30 seconds of the video, viewers are engaged. In today’s world, most nations have been victims of terrorism, so Dolev’s words immediately strike a chord with viewers. Her voice is full of passion, and viewers are eager to hear how she believes she can stop terrorism.

Dolev then begins to explain how her company developed security screening technology that makes going through airport and arena security checkpoints easier. (Who else wants to get through airport security faster?) Dolev describes the complicated technology in such a simple, relatable way that viewers are compelled to continue watching.

Within two weeks of the video’s launch, it earned 1,000 views on YouTube. The Huffington Post also included the video in an article about Qylur.

Want to get recognized for your hard work? Find out about Ragan and PR Daily’s award programs here: https://www.prdaily.com/Main/RaganAwardsPrograms.aspx. 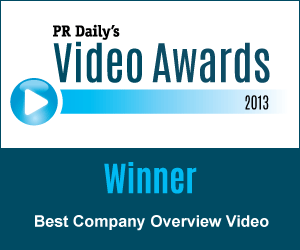