NYU Langone Medical Center has been a consistent winner in Ragan’s Employee Communications Awards over the past few years.

And now the PR and internal communicators at the world-famous hospital in south Manhattan are doing the same in organizational video. They have won the prize for Best News Story Video in PR Daily’s 2013 Video Awards.

On Oct. 29, 2012, Langone communicators shot moving, daring footage of a birth in a pediatrics unit illuminated only by flashlights and glow sticks as the surge of Superstorm Sandy lapped at the hospital’s front doors.

The video, titled “Born in the Storm,” begins in utter blackness lasting several seconds. A nurse’s voice is heard counting, urging the mother to push, and then come the angry protests of a newborn—the only clues to what was happening.

The lusty yells through the on-screen blackness told viewers all they needed to know. Stone Weinstock had arrived on this storm-tossed planet.

It was superb, moving theater. Prize footage for the TV evening news. Instant relief, or at least distraction for anxious metro-area viewers, from Hurricane Sandy.

And then came the interviews with doctors, nurses, the child’s grandmother, and the mother, who was evacuated on a plastic sheet down a darkened stairway moments after giving birth.

Everything in this video moves the viewer: the themes of skilled teamwork; the surge of Langone medical students who turned out en masse to help; the celebration of new life delivered, then evacuated by Langone staff as the murderous storm pounded, flooded, and battered downtown Manhattan.

Congratulations to them and the entire communications team at Langone. 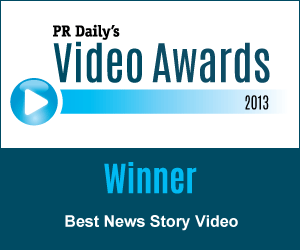