What’s better than a long, rambling video on how to improve management behaviors? Well, just about anything really, but a specific example would be Schneider Electric’s “In a Nutshell: My life as a manager” video series, which offers laughs and advice in five easy-to-digest, one-minute episodes.

The company broadcast the five episodes over five weeks, and they’ve been a smashing success. Not only have the videos generated more than 10,000 click-throughs, but managerial behaviors have significantly improved.

Leadership communications manager Marie Le Men and her team whipped the series up—from scripting all the way to filming—in just two days. Each episode, which even includes a very short title sequence, focuses on a manager named Philipp who just can’t figure out the problem he’s having communicating.

The videos end up feeling a lot like “The Office,” with recurring characters and some cringe-inducing humor, though here the end result is one from which business leaders can actually learn something. For their creativity, Le Men and her team are the winners of PR Daily’s 2013 Video Award for Best Video Series. 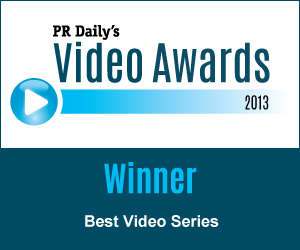