Live-streaming an event is fraught with perils, all lurking in the shadows, waiting to pounce like a jungle cat.

Of course, a feral feline of your own making is easier to tame, though the logistics of a webcast done at a live, open event can be rife with hazards.

The spontaneity and the vibrant visuals of the Sigma Safari Experience, cast from the Photo Plus Expo in the urban jungle of New York, helped Sigma Corp. and Matter Communications win tops honors for Best Webcast/Livecast in PR Daily’s Video Awards for 2014.

With lithe female models made up and costumed to resemble wild cats, the on-camera experts talk viewers through using photographic techniques and equipment. The detailed tutorial and clear branding help reinforce Sigma’s standing in the photography industry, and regardless of whether viewers hop on down to the exhibition, potential customers’ interest is piqued.

The on-camera instructors handle the inherent (and only occasional) technical miscues openly and with aplomb, making for a genuine, engaging experience.
Sigma itself says the Sigma Safari Experience live stream pulled in the following numbers:

Beyond those metrics, the safari concept will stay vivid in the minds of real-time viewers and those who find the series online. Kudos to Tim Bradley, senior video producer, and Leo Bonarrigo, video producer, for their fine work. 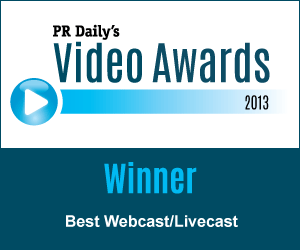