Stereotypes abound when people think about American Indians. A news magazine that tells the stories of members of the Cherokee Nation from their own perspective seeks to clear up the misconceptions. The success of “Osiyo, Voices of the Cherokee People” has won Cherokee Nation Business first place in the “Video Series” category of PR Daily’s 2016 Video awards.

The idea was jointly conceived by the CEO and the communications VP of Cherokee Nation Businesses (CNB), the tribally owned holding company of the Cherokee Nation, which employs 10,000 people through its gaming, hospitality, personnel services and other operations.

The series is broadcast on local and regional affiliates and on the FNX (First Nations Experience) national network, which is dedicated to American and indigenous programming. It is also shared via YouTube; the Osiyo TV channel has attracted more than 4,300 subscribers.

Although the citizens of the Cherokee Nation are the primary audience for the series, “Osiyo, Voice of the Cherokee People,” has captured the attention of viewers throughout the United States and internationally. The series website has been visited more than a quarter of a million times by some 100,000 people, and the TV broadcasts regularly get a 2.0 rating in the Tulsa market and occasionally achieve a 4.5 rating.

Congratulations to Amanda Clinton, CNB’s vice president of communications, and Jennifer Loren, the series executive producer and host, for an innovative, mind-changing series. 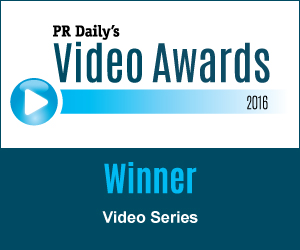