In a bellwether case in the opioid crisis, Johnson & Johnson has reached a potential deal with Cuyahoga and Summit counties in Ohio. The $20.4 settlement would remove the company from a federal lawsuit against opioid manufacturers set to begin next month.

Even though it is offering a settlement, the company “makes no admission of liability.”

Why it matters: It might be sound legal strategy to deny wrongdoing while offering a multimillion-dollar settlement, but it shouldn’t be confused with good crisis management. One thing that deeply angers consumers is when a giant corporation can wreck people’s lives and never acknowledge its mistakes. At some point, J&J might want to apologize.

However, with 2,000 other cases in various states still pending, J&J can be forgiven for being cautious.

Facebook’s leader addressed the rising social media star in an internal forum that was leaked to The Verge. He compares TikTok unfavorably to Instagram’s “Stories,” saying it’s as though it were “Explore for stories, and that were the whole app.”

However, TechCrunch argues that’s a misreading of TikTok.

TikTok isn’t about you or what you’re doing. It’s about entertaining your audience. It’s not spontaneous chronicling of your real life. It’s about inventing characters, dressing up as someone else, and acting out jokes. It’s not about privacy and friends, but strutting on the world stage. And it’s not about originality — the heart of Instagram. TikTok is about remixing culture — taking the audio from someone else’s clip and reimagining the gag in a new context by layering it atop a video you record.

What you should know: Video is a crucial medium for online communication, and how users make and design videos to share messages and attract audiences is constantly evolving. The big lesson from TikTok is how important it is to be entertaining and operate within a set language of communication. With social media video, that means using pop culture to flavor specific messages for your audience.

According to the Pew Research Center, most people think leaders behave unethically at least some of the time. 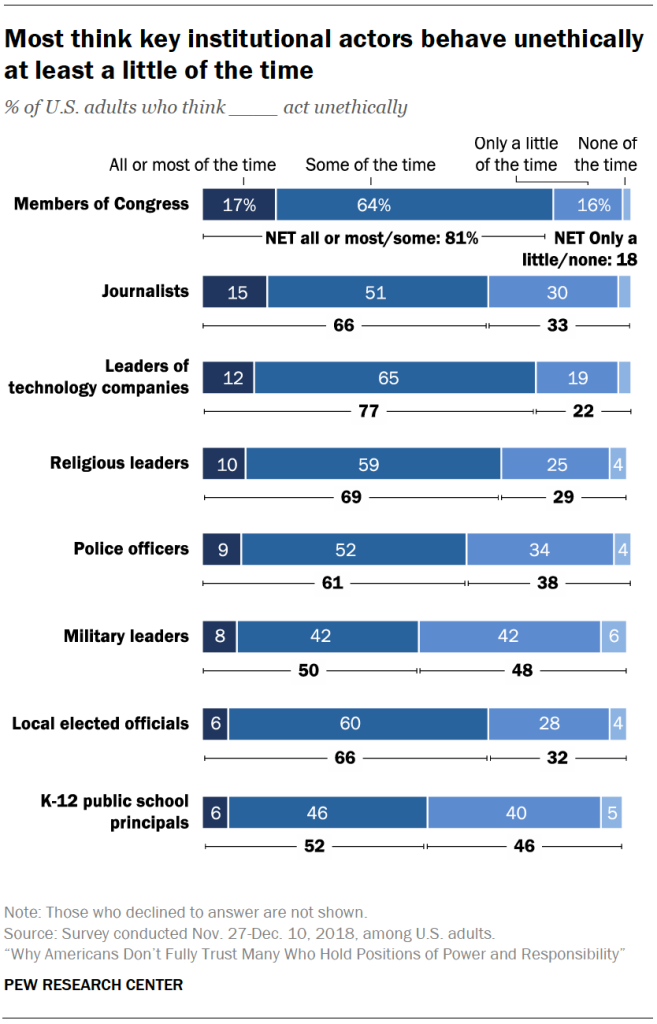 That means most audiences are ready to believe that your organization’s leaders have made bad choices. When combatting a crisis narrative, you will have to overcome a healthy skepticism if you want to change public perception.

Do you use voice memo transcription software in your daily tasks? Taking notes can be tedious and time-consuming, but technology might finally have an answer for tired typists.

In a story for The New York Times, several market solutions that use AI to offer simultaneous transcripts of conversations, business meetings and more are generating interest in the business community. However, companies should think about privacy concerns as they plan to capture conversations from their employees and customers.

[Sam Liang, a Stanford-educated electrical engineer] said that companies were interested in capturing all of the conversations of employees, including what goes on around the water cooler.

It might be fascinating to learn what your consumers and employees have to say, and technology offers new ways to capture immense amounts of data, but it is essential to capture the information ethically. Let people know what is being recorded, and offer them the ability to see their data—and erase it if they want to.

After top running coach Alberto Salazar, who had ties to Nike, was banned for his work helping runners beat doping tests, Nike had to defend emails from its top executive Mark Parker who was in the loop on some strange experiments to gauge how much testosterone an athlete could use before testing positive.

“Mark was shocked that this could be the case, and given Mark’s passion for running, Dr. Brown and Alberto made Mark aware of their findings,” the spokesman said. “Mark Parker had no idea that the test was outside any rules, as a medical doctor was involved. Furthermore, Mark’s understanding was that Alberto was attempting to prevent doping of his athletes.”

Why it matters: Nike’s credibility is at stake, given the company’s ties to star athletes and athletic achievement. However, the company has limited the damage by cutting ties with Salazar and offering a robust defense of Parker’s emails. The stock price hasn’t taken a big hit, in part because Nike has been so successful in selling directly to consumers and developing a strong relationship with its audience.

We asked what the most important platform was for your video efforts, and the vast majority said YouTube and Instagram were the top priority.

What is the most important platform for your video efforts? Share your thoughts for our #morningscoop.

However, Facebook and LinkedIn got a little love as well. Think about cross-promoting your video content; if short videos do better on one platform, create short selections of your longer video to share and drive traffic back to your longer masterpiece.

We have been asking PR pros about how they see their investments changing in 2020, and some plan to hire new team members as they tackle key projects.

Will you hire new team members in the next year? Share your predictions for our #morningscoop.