Scientists and citizens in Iceland are mourning the death of a glacier—the first moving sheet of ice to officially succumb to global climate change.

Observers hiked two hours up a volcano to the former site of the OK Glacier to lay a plaque commemorating the now extinct ice river.

The plaque, called “A letter to the future,” reads in both English and Icelandic: “Ok is the first Islandic glacier to lose its status as a glacier. In the next 200 years all our glaciers are expected to follow the same path. This monument is to acknowledge that we know what is happening and what needs to be done. Only you know if we did it.”

[Rice University professor Cymene Howe] says the plaque’s direct messaging was intentional. The team of researchers wanted to use the glacier’s passing as a call to climate action.

“By memorializing a fallen glacier, we want to emphasize what is being lost or what is dying,” she says. “And we also want to draw attention to the fact that climate change is also something that humans have accomplished, if you will, although it’s not something that we should be particularly proud of.”

The move is trending on social media, a reminder of the potency of symbolism and the ways real-world and online messages and events interact and feed each other.

Okjökull glacier in Iceland is considered "dead." It's the first major Icelandic glacier to disappear due to climate change.

Scientists are installing a memorial plaque on the barren ground as a message to future generations. https://t.co/P4WfDnm8UI

How can you create a physical symbol of your message—and turn that symbolism into an online event?

If you’re a fan of Target’s “up & up” brand—the product line that includes diapers, cleaning supplies and toiletries—you’ll look forward to the imminent launch of Target-branded grocery items.

The chain announced a new line called Good & Gather, which will debut Sept. 15 across its locations and carry more than 2,000 food products by the end of 2020.

Impress your boss: You don’t have to represent a retail chain to embrace the “one-stop shop” mentality. Gather your team and brainstorm ways to answer consumers’ questions and provide solutions.

This could be accomplished through brand partnerships and new products or services—or by redesigning your website to help visitors easily find answers and by creating social media content that doesn’t just carry marketing messages.

Ideas that stand out should be presented alongside audience behavior data, such as sales, website traffic and social listening metrics.

“Back-to-school” time might be a specific date for your community, but for the entire U.S. population the phrase can mean a wide range of start dates.

Data from Pew Research Center shows that students can return to school as early as July 23 and as late as the week after Labor Day. 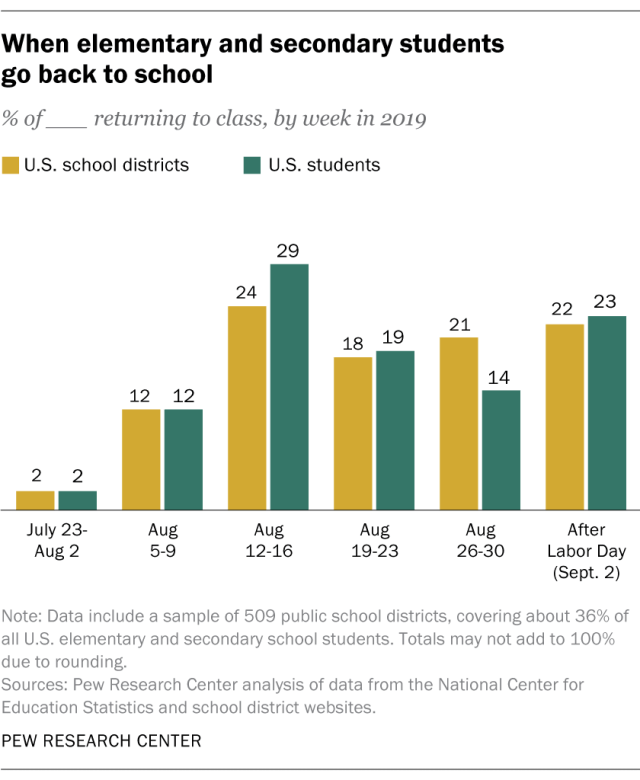 If you are planning an activation around this yearly event, make sure you identify when your specific targets are heading back to school or getting their children ready for a new academic year. Being flexible will help you reach a wider audience and avoid missing the crucial transition from summer fun to hitting the books again.

[FREE GUIDE: The role of managers during COVID-19, social unrest—and the next big crisis]

Pharmaceutical company Novartis International AG is facing scrutiny for manipulating data in a study of Zolgensma—a drug that treats children suffering from spinal muscular atrophy and which costs roughly $2.1 million per infusion.

The company’s chief executive, Dr. Vas Narasimhan, told analysts that Novartis didn’t report the issue while the U.S. Food and Drug Administration completed its review of the drug, though it’s firing the employees who were involved.

“He’s certainly in big danger of losing credibility,” said Brad Loncar, an investor who runs an exchange-traded fund of biotech companies. “They’ve handled this in just about the worst way possible.” Mr. Loncar doesn’t own shares in Novartis.

The FDA has referred the Zolgensma matter to its Office of Criminal Investigations to begin a preliminary inquiry, according to a person familiar with the events. Submitting false data to the agency as part of a new-drug application could be a crime if investigators prove the actions were intentional and not an oversight.

Why it matters: Though timing is crucial in a crisis communications strategy, withholding information about a wrongdoing, security breach or other mistake will not help you sustain stakeholder trust and rebuild your reputation. The truth will come out eventually, and your omission can further damage credibility.

“We tried to do all of the right things,” Dr. Narasimhan said on the analyst call. He declined to comment for this article.

Please note that “all of the right things” do not include sweeping potentially damaging information under the rug.

WW (formerly Weight Watchers) is expanding its sights to a new consumer group—kids and teens ages 8 to 17—with an app called Kurbo.

Adolescents track their food in Kurbo’s free app. A green, yellow, or red light grades what and how much of a food they eat. They can also consult with a digital coach for a fee, starting at $69 per month.

“This is a scientifically proven way to get kids to eat healthier and move more, so we’re excited to get it into as many hands as possible,” WW’s Chief Scientific Officer Gary Foster told CNBC.

We’re excited to introduce @KurboHealth, a science-backed tool uniquely designed for kids and teens who want to improve their eating habits and get more active. Find out more at https://t.co/1hvFKOWAGd! #WellnessThatWorks pic.twitter.com/a5SLVS5wtk

The news has attracted both kudos and concern.

Mindy Grossman, WW’s president and chief executive, said this in a video shared on Twitter:

“The idea of really helping and supporting families was not just something that we wanted to do or was important for us to do, but it’s really a responsibility for us to help families and help change the trajectory of what’s happening in the world.”

To change the health trajectory of the world, we have a tremendous opportunity, but also a responsibility, to
help kids, teens and families adopt healthy habits.

With the launch of Kurbo by WW, we can be a trusted and powerful partner for families. 👉 https://t.co/4C9XhzKFbv pic.twitter.com/1Zp4nuWlGP

An upcoming Twitter feature is aimed at helping users cut out spam and harassing messages.

Unwanted messages aren’t fun. So we’re testing a filter in your DM requests to keep those out of sight, out of mind. pic.twitter.com/Sg5idjdeVv

… Twitter allows users to set their Direct Message inbox as being open to receiving messages from anyone, but this can invite a lot of unwanted messages, including abuse. While one solution is to adjust your settings so only those you follow can send you private messages, that doesn’t work for everyone. Some people — like reporters, for example — want to have an open inbox in order to have private conversations and receive tips.

Why it matters: Having another tool to cut down on irrelevant or abusive messages can help users navigate Twitter (as well as help the platform attract users), but PR pros can take this as a reminder to keep messages to reporters succinct and relevant.

As many U.S. children get ready to start the school year, some PR pros are also looking to go back to the classroom. We asked what skills you would most like to improve with extra training, and the results were pretty even.

The winning answer matches with reports that PR pros are most concerned about being able to prove value and ROI to leaders.

It's back to school time across America, and you're never too old to learn something new. What skills are you looking to improve this fall?

For agency and in-house leaders, investing in training can be a great way to retain employees. Many people report higher job satisfaction when an employer offers professional development.

#GreenShirtGuy found online fans after his reaction to anti-immigration protesters went viral. For PR pros, the moment is a reminder about the power of laughter.

What PR tactic makes you laugh out loud at its audacity or sheer ridiculousness? Add your caption to our weekly GIF caption contest with the #MorningScoop.

There's plenty of PR behavior that rankles, but what's a PR tactic that makes you laugh out loud at its audacity (or stupidity)? Share your GIF caption for our #MorningScoop. pic.twitter.com/wk2Df2NGVL