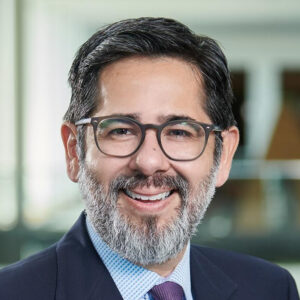 Jano Cabrera is the chief communications officer at General Mills. A triathlete in the world of communications, he combines a senior background in politics, global consulting and in-house corporate relations. He has held senior strategic and operational roles in both the private and public sectors. In 2021, he was inducted into the PRWeek Hall of Fame. Before joining General Mills, he served as senior vice president of corporate relations for McDonald’s, where he led global media relations, financial communications, brand reputation, consumer engagement and internal communications for the 9th most globally recognized brand. Prior to that, he served as worldwide vice president of Burson Cohn and Wolfe. He previously volunteered to travel to Baghdad, Iraq in 2005 to serve as a National Democratic Institute advisor to the transitional national assembly as they developed their constitution and later as an election observer during their historic elections. He also spent a decade working in politics. He headed communications for various presidential campaigns, worked in the White House and started his political career as a legislative aide on Capitol Hill and a federal budget analyst at a Washington DC think tank.