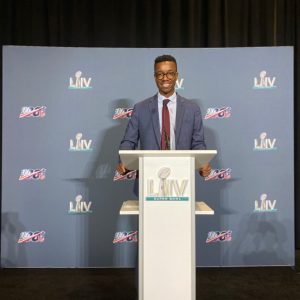 Kenlyn Tyree was recently named Director, Communications & Public Affairs at the National Football League (NFL) in December. Kenlyn’s primary role is to amplify media coverage for all NFL initiatives and provide pre-event planning and onsite Public Relations (PR) leadership at NFL events. Prior to the NFL, Kenlyn worked at the National Basketball Association (NBA) for 11 seasons, in multiple business areas including Video Production, Social Media and Marketing Communications. He managed a team that is responsible for providing sports media coverage reports to the senior leadership group, which includes the NBA Commissioner. He served onsite as a PR executive at league events, including All-Star, Finals and Draft for the NBA as well as the WNBA.