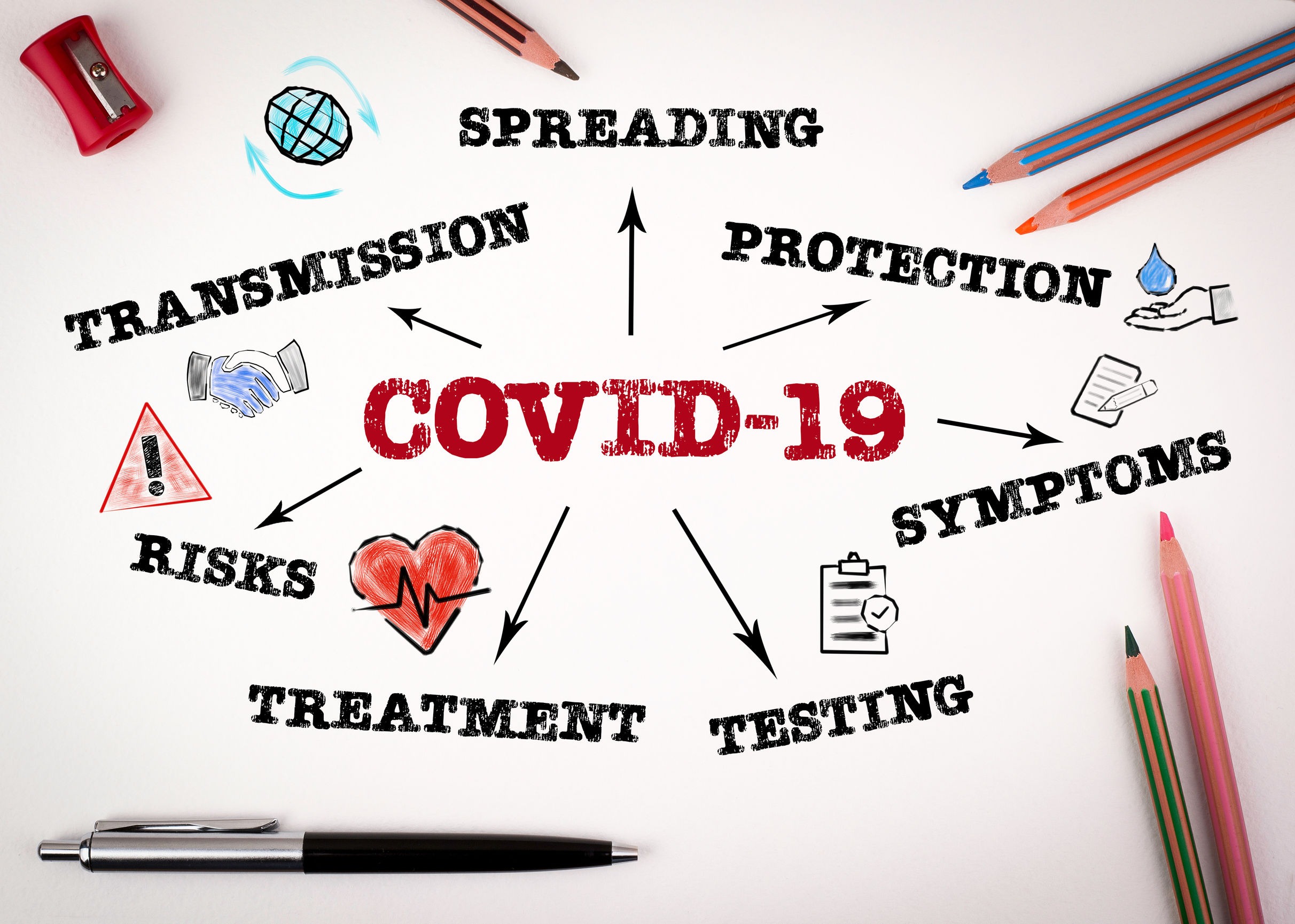 Here are 10 terms everyone should know to help them and others in their families and communities understand the disease and avoid contracting it.

Asymptomatic. This term simply means “presenting no symptoms of disease,” but the connotation is that the asymptomatic person or animal has a disease but shows no signs of it. The insidious possible result is that such a person, unaware that contagion is a risk, may spread the disease to others, who are also unsuspecting. The term is the antonym of symptomatic, the adjectival form of symptom, which is from the Greek term for “attribute” and means “evidence” or “indication.”

Coronavirus. This word refers to a large family of viruses that includes SARS (severe acute respiratory syndrome), the first identified strain of which caused a two-year outbreak that began in 2002. In 2019, a new strain, SARS-CoV-2, resulted in a disease identified as COVID-19. This acronym is taken from the first two letters of each word combined to form the compound word coronavirus and the first letter of disease, followed by the last two digits of the year in which the virus strain that causes the disease was identified. The term “novel coronavirus” refers to the fact that the virus is novel, or new.

Corona, from the Latin word for “crown,” is used to refer to something resembling a crown; the virus’s shape suggests just that, hence the name. Virus is from the Latin term for a secretion, poison, or venom and refers to any of a type of submicroscopic agents that causes disease, or a disease caused by such an agent; the common cold is caused by various viruses unrelated to the coronavirus and various flu strains.

By extension, virus has also come to refer to something that has a metaphorically poisonous effect on the mind or the soul and, more recently, has acquired an additional, neutral sense in adjectival form: Something that goes viral has been disseminated widely within a culture, primarily through social media.

Flatten the curve. This phrase refers to the strategy of minimizing the number of cases of a contagious disease so as not to overwhelm health care resources and to avoid an early onslaught of cases.

The curve in question is one charted on a graph to show the increase in cases, and the flattening is the effect on the curve so that it is visualized as a long, low hump (framed by a gentle upward curve and a gentle downward curve as the number of cases increases and diminishes, with a long, relatively static middle section) rather than a steep spike that indicates a rapid increase due to rampant contagion. Flattening the curve is not only about mitigating the impact on hospitals and health care personnel but also about maintaining a minimal number of early cases: The lower the number of people who contract a contagious disease, the fewer other people will become infected before a vaccine is available.

Herd immunity. This phrase refers to the concept of a reduction in the risk of infection resulting from mass exposure to the contagion or widespread immunization. (The use of herd stems from the idea as applied to livestock or a large population of wild animals; immunity, meaning “resistance to disease,” is from the Latin term immunis, meaning “no obligation,” from the root word munus, or “service”—also the source of municipal.)

Herd immunity from the latter cause is an ideal result, but a strategy of exposing a large population to a disease to produce herd immunity benefits only the survivors, not the many people who succumb to the disease or continue to suffer from chronic symptoms.

Morbidity. The word morbid is associated among laypeople with the sense of “preoccupied with gloomy feelings or gruesome details.” However, it has no direct relation to death. It derives from the Latin term morbus, meaning “disease,” and in scientific and medical contexts, morbidity refers to the rate at which a population contracts a disease. The term for the measure of the proportion of people who have died from a disease is “mortality rate”; mortality is from the Latin term mortalis, meaning “death.”

Pandemic. COVID-19 is described as a pandemic (from the Latin word for “all people”) because that term indicates a disease both widely dispersed geographically and common in given populations; it is both vertical and horizontal in reach.

Quarantine. This word for a policy restricting movement of people or goods in order to prevent the spread of disease or pests derives from the Italian word quarantena, from the number quaranta (“forty”), from the custom in the Middle Ages of requiring ships arriving at Italian ports to remain at anchor for 40 days to ensure that their crews would not pass on any contagious disease. (To self-quarantine is to voluntarily submit to isolation.)

The related phrase “cordon sanitaire,” from the French term meaning “sanitary cord,” refers figuratively to a barrier enclosing a quarantined community (originally in reference to a military installation).

Shelter in place. Originally, to shelter in place meant to remain in a structure in which one is located when an emergency caused by biological, chemical, or radioactive contamination is announced (such as when a large-scale gas leak occurs), rather than going outside to an emergency shelter or evacuating to another area and being exposed to the contaminant. By extension, the phrase now refers to the strategy of remaining socially isolated as much as possible to avoid contracting (or passing on) a contagious disease.

Social distancing. This phrase, in the generic sense of interpersonal interaction, is 200 years old, but it recently entered the general vocabulary with a new meaning: maintaining physical space between oneself and others to avoid contracting a disease.

The recommended distancing is six feet, to prevent accidental exposure through coughing or sneezing, although aerosols (airborne solutions of, in this case, particles such as saliva) can be projected at greater distances and this spacing is likely to prevent contamination only through mere breathing.

Vaccine. A vaccine is a substance injected into the body of a person or an animal to protect it against disease. The substance is generally a weakened or killed form of a bacteria or virus, and the injection prompts the person or animal to develop immunity when its body produces antibodies against the particular microorganism without suffering from full-blown symptoms or succumbing to the disease. The word derives from the Latin for “of or from a cow” because the first vaccine was developed to prevent cowpox.

A version of this post first appeared on Daily Writing Tips.