The key to that success is simple: listening.

By observing and engaging with its communities, it knows what captures their attention. Its strategy and results have earned the Scholastic Corporation PR Daily’s 2013 Social Media Award for Best Community Engagement.

Scholastic doesn’t just blast the same content across all social media channels. It tailors the content for each audience.

For example, it switched the focus of its Google+ page to concentrate more on education and technology after it noticed an increase in educators on the social network. The result: Follower count exploded. It’s up 400 percent to 75,000 followers in just four months.

Hashtags
Every Friday, it taps into the popular #weekendreads to discuss books its fans plan to read. It also follows Twitter’s trending topics to leverage content around those topics. It uses hashtags in other ways as well. Every August, Scholastic uses the #firstday hashtag it created so its fans can share their first day of school. And, from April to September it uses #summerreading to get kids motivated to read.

Sweepstakes
Sweepstakes on Facebook, Pinterest, Twitter, and blogs are a staple for Scholastic. It has also been known to start a Twitter game, such as posting a Tweetpic of a book cover and asking fans to guess the book, to engage them.

Live tweets and Twitter parties
Scholastic live-tweets events and shares photos and happenings so fans can interact even if they can’t attend an event like Comic Con.

Asking questions
Scholastic’s social media team has learned that its fans like to answer simple questions, such as: What do you do when your kid is frustrated with his homework? What’s the biggest challenge you face in your classroom? And, every night at 10 p.m. ET, the Scholastic Teachers Facebook page shares a question from a teacher that it received in its inbox.

Those are just some of the tactics the company uses to engage and grow its community fan base using social media.

We congratulate the team that collaborated on the winning effort: Kyle Good, Morgan Baden, Megan Kaesshaefer, Lia Zneimer, and many more Scholastic employees.

Check out a full listing of and links to their social media accounts here. 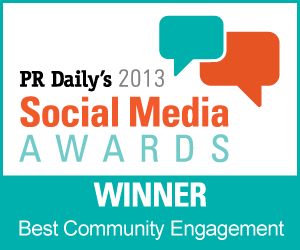