We’ve all heard about things taking off on social media, but leave it to the world’s most populous nation to make a single wall poster go viral.

The consulting firm Genedigi MSLGROUP managed to cash in on a PR bonanza by tapping into a traditional Chinese advertising form of wall clutter and making it go nuts on social media.

The creative announcement explains why the firms have seized the crown as winners of the Best News Release/Announcement category in PR Daily’s 2013 Social Media Awards.

It started like this. The contestants were out to promote Shijiebang, a new online travel consulting agency that didn’t want to spend much.

So Genedigi MSLGROUP stole an idea from the small ads that are spray-painted, glued up, or stamped seemingly everywhere in China. These ads are considered eyesores and often spark furious debate on Chinese social media.

The wicked geniuses from Genedigi MSLGROUP printed out a cheap poster the size of two iPhones that read:

There was no mention of the travel company, and instead of the usual phone number, there was a QR code that would drive traffic to Shijiebang’s site on the WeChat social media platform.

The promo firms stuck the poster up by an office elevator, and a staffer took a photo and posted it to a personal account on Weibo, the Chinese Twitter. The message: “I saw this ad near SanyuanQiao subway station. OMG the taggers aren’t leaving their phone numbers anymore, they are leaving QR codes … this is really the digital age! LOL”

Genedigi MSLGROUP report, “And then we waited.”

Well, some of us would have waited till kingdom come for a result. But for these guys? It went insane.

The media ate it up as well, producing two television stories, reports on video websites, a half-page newspaper story in The Beijing Morning Post, and multitudinous other PR bounty.

The return on investment is estimated to be in excess of $100,000, according to Genedigi MSLGROUP.

“The best part is that it only cost about 20 U.S. cents,” our sly contestants report. 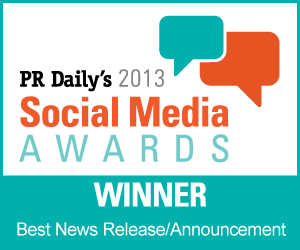