The idea behind the “Taiwan Excellence Cares” project, the brainchild of the Taiwan Bureau of Foreign Trade and the Taiwan External Trade Development Council (TAITRA), is a simple one: to show people Taiwan’s “excellent” lifestyle.

The Bureau and TAITRA worked with MSLGROUP to develop what they dubbed the “Big Idea project,” a way to get people from throughout the region to come up with great ideas for Taiwan Excellence products.

The campaign reached into five markets—Taiwan, mainland China, India, Indonesia, and Vietnam—searching for proposals. Using a colorful, almost video-game-like website, clever videos, and social media, the agency pulled in more than 56,000 registrants and several hundred proposals. The clever approach MSLGROUP took makes it the winner of the Best Use of Social Media for Crowdsourcing category in PR Daily’s 2013 Social Media Awards.

About 700,000 people visited the website to vote for their favorite ideas, and the campaign garnered more than 160,000 fans on social networks. In the end, the campaign had more than 57 million impressions.

Out of the various entries, 15 were chosen for further development. Taiwan Excellence also donated $150,000 in products to local communities. 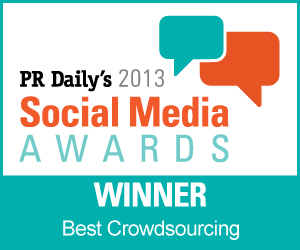