Kids. They’re full of opinions about how the world ought to be. But ask them to actually show up and vote, and many of them balk.

At least that’s what le Directeur général des élections du Québec (DGEQ) found, to its alarm, when the youth participation rate declined to 36 percent in the 2008 provincial elections.

Overall voting was also low, at 57 percent. So DGEQ brought in Citoyen Optimum to boost participation.

Citoyen Optimum claims top honors in the Best Use of Social Media for Governmental/Public Affairs category of PR Daily’s 2013 Social Media Awards because of its success in boosting participation through its “Pourquoi je vote” campaign. Youth participation rose by 26 percent to 62 percent, and the overall rate went up by 18 percent to 75 percent.

Because of the importance of social media in student mobilization, it used both digital and traditional media to message youth according to its editorial calendar.

From widely shared videos to pins, Citoyen Optimum succeeded in boosting discussion on social platforms organically, without paid promotions. There was a 1,822 percent boost in visitors to the blog compared to the previous period. There were also numerous video shares, and nearly 100,000 views. 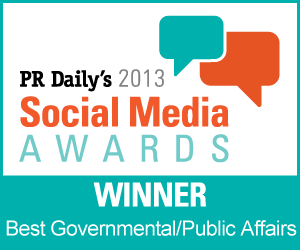