AT&T has nearly 250,000 employees around the world, and as the company discovered over the past year or so, many of them are quite active on social media.

Since its launch in December 2012, the “Twitter Tribe,” a group of employees who take to Twitter to share company news, announcements, and other info, has become a major force. It’s more than 1,200 people strong and has resulted in more than 10,000 tweets. People are engaged—those tweets have inspired nearly 200,000 responses and retweets—and the group has generated more than $300,000 in media value.

AT&T teamed with agency FleishmanHillard to build the tribe, and invited any employee interested in participating to join. AT&T offered employees a badge to use on the company’s internal social network for being a part of the tribe. It also built a special section of tSpace, the internal social business platform, specifically for the tribe community. Members of the community readily get access to company information and have opportunities to be further rewarded for their participation.

The immense success of the Twitter Tribe makes AT&T and FleishmanHillard the winners of the Best Use of Twitter category in PR Daily’s 2013 Social Media Awards. They didn’t just use a handful of corporate Twitter accounts. They used hundreds, and hundreds more are poised to join. Some 1,600 employees are awaiting their membership to the tribe. 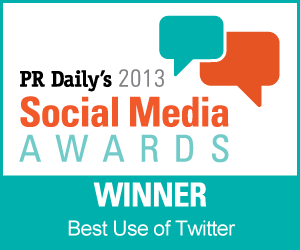